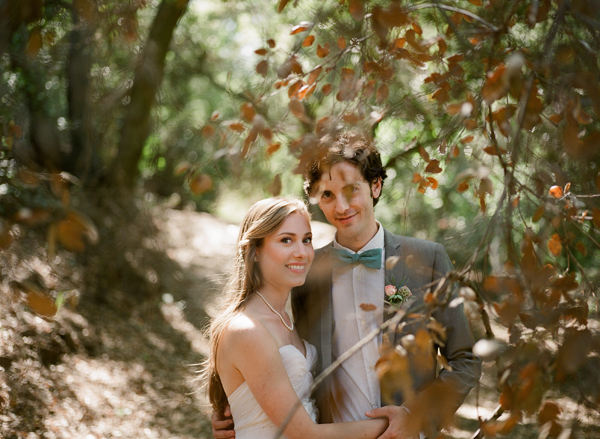 Yesterday Mark and I celebrated our first wedding anniversary! It’s pretty crazy to think that an entire year has gone by. We kicked off the day by exchanging gifts, followed that up with a lovely brunch date, and then came home and ate the year-old slice of red velvet wedding cake that we had been saving in our freezer… (All I can say about that last part is ick. How did that tradition get started anyway?!) I’d say we both did a pretty swell job in the gifts department…

To celebrate our first year of marriage, I surprised Mark by asking our wedding band, Petrojvic Blasting Company, to record the three songs they played during our ceremony. Their music was without a doubt one of the most memorable parts of our wedding. I’m already not so great at keeping secrets, but this was a really hard one! I’ve basically had these three songs on repeat since I received the files from the band a week ago. I was covertly listening to them over and over again, but then I’d catch myself humming the songs when Mark was with me. Thankfully, I didn’t give anything away… 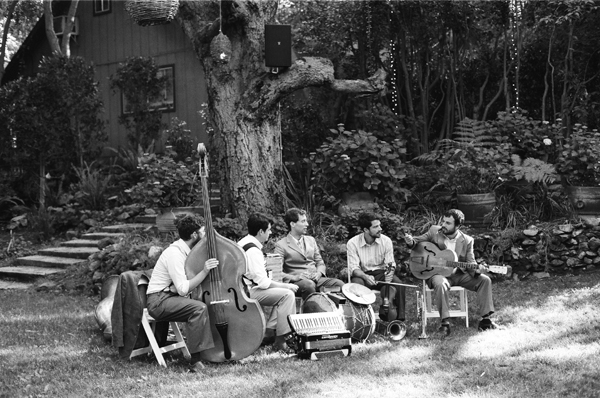 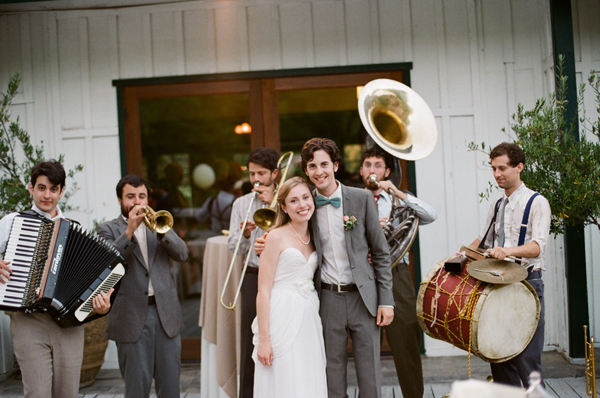 Mark was completely surprised when I presented him with the songs on Sunday. I put the song files on a flash drive decorated with washi tape, with a little tag I labeled with the date…

We both had the same reaction when we listened to the recordings for the first time: tears—just like that! Both of our memories of the day are so tied to the music. I listen to these songs and it’s like I’m transported back to June 2, 2012. I remember our vows; I remember walking down that aisle. It’s a pretty incredible feeling.

Mark and the rest of our wedding party walked down the aisle to “You Ain’t Goin’ Nowhere,” by Bob Dylan. I walked down to “Girl of My Dreams,” a song from the 1920s, and then our recessional was to “Champs Elysees” by Joe Dassin. Give them a listen:

Part 2 of Mark’s present was a custom portrait from our favorite stationary company, Rifle Paper Co. I figured it was fitting since your first anniversary is your paper anniversary. It still has to be framed and matted, but we’re probably going to hang it on the same wall as our beloved Los Angeles print from Rifle. 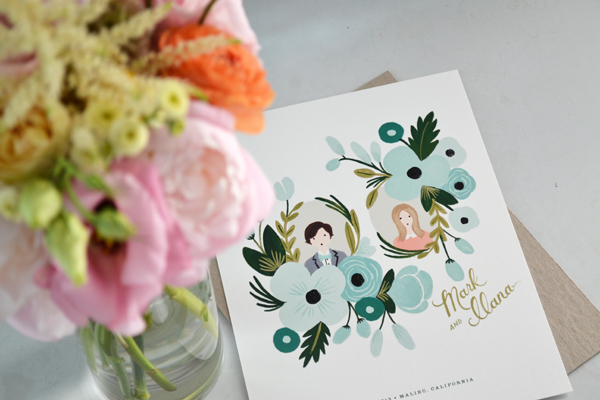 I’ll be sharing Mark’s gift to me later this week. It was pretty remarkable as well, so stay tuned!

P.S. You can read our wedding vows in this post and see some of our DIY décor here.

P.P.S. I don’t know if I ever even told the boys from the Blasting Co. this, but when Mark and I first heard them play about a year before we were even engaged, we both said, “I want them to play at our wedding!” I’m so glad that we were able to make it happen.

Hello there! My name is Ilana Saul and Hooray Hurrah is my lifestyle blog. Hooray Hurrah is a place for the things that inspire me from fashion to weddings to decor and much, much more.
View all posts by Ilana Saul →
This entry was posted in Weddings + Relationships and tagged anniversary, gifts, music, presents, wedding. Bookmark the permalink.

One Response to Our First Anniversary